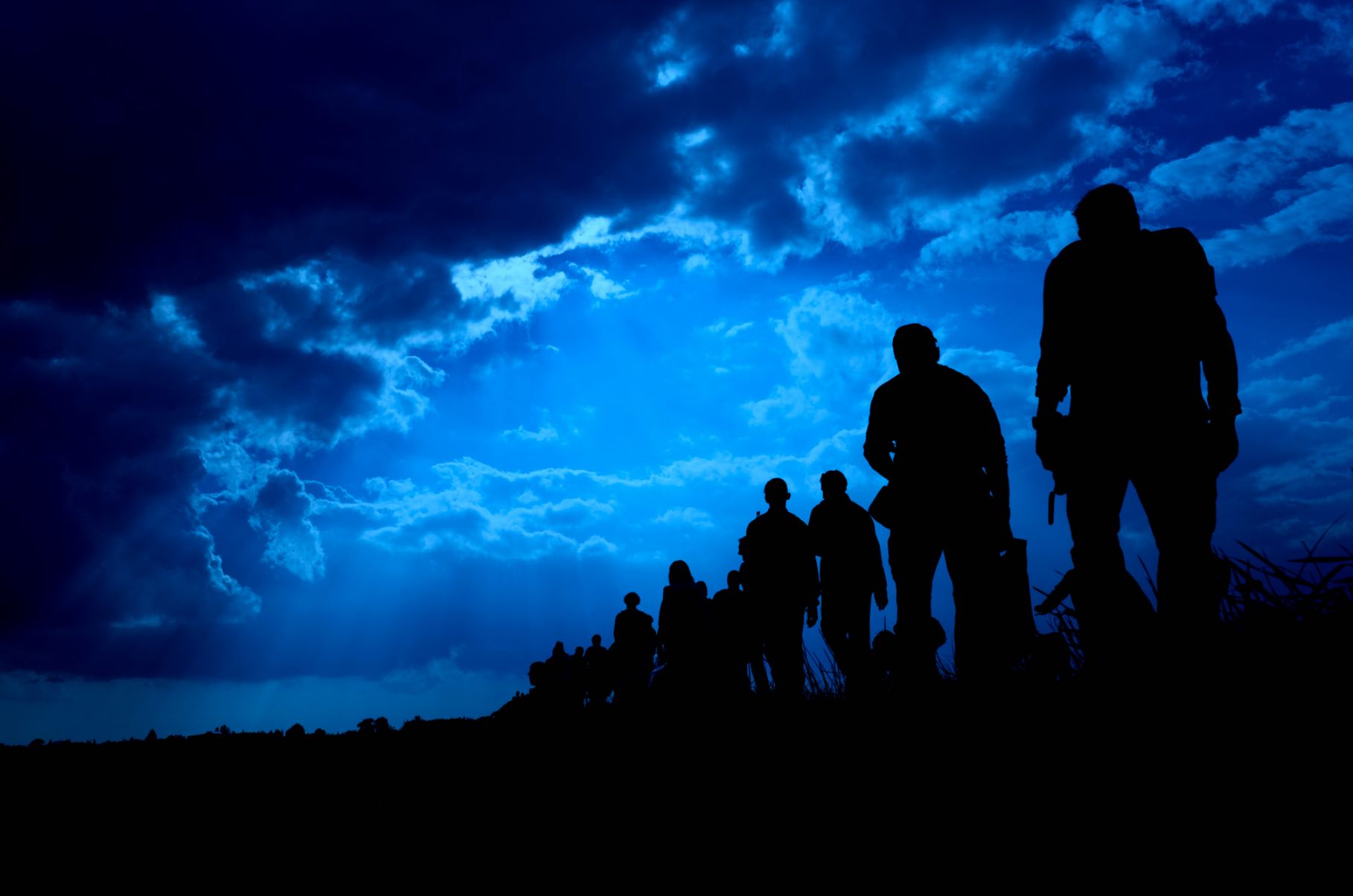 Muslims for Migrants; A Joint Letter

Abu Huraira (May Allah be pleased with him) reported: The Messenger of Allah (peace and blessings of Allah upon him) said, “He who gives respite to someone who is in straitened circumstances, or grants him remission, Allah will shelter him in the shade of His Throne, on the Day of Resurrection, when there will be no shade except its shade.” (Tirmidhi, 1306)

The message is clear, the way we treat the most vulnerable of Allah’s creation has consequences to us both individually and collectively, and both in this life and the next.

As the humanitarian crisis at the southern border deepens, there is a deafening silence from most corners of the American Muslim community. One might ask, “Why should that silence be concerning?” Shouldn’t the nation of the Prophet (peace and blessings of Allah upon him) who was himself an orphan and a migrant sent as a mercy to the worlds be the first to be moved with the images of children in cages? Migration and asylum are God-given rights that individuals and nations would do well to respect. These rights are affirmed in the Qur’an and the Sunnah of our Prophet Muhammad (peace and blessings of Allah upon him).

As for those whose souls the angels take while they are oppressing themselves, the angels will say to them, “What was your former state?” They will respond, “We were oppressed in the land.” The angels will counter, “Was not Allah’s earth spacious enough for you to migrate therein.” (4:97)

The oppression referred to in this verse specifically focuses on persecution because of faith, but the general meaning of the wording can accommodate any form of oppression which involves the denial of a person’s Divinely conferred rights.

Migration lies at the very heart of the prophetic tradition in the Abrahamic religions. Abraham himself was a migrant. His son Ismail was a migrant. The Children of Israel along with Moses were migrants, as was Jesus. Not only was our Prophet Muhammad (peace and blessings of Allah upon him) a migrant, he twice sent many of his Companions (May Allah be pleased with them) to Ethiopia to seek the protection of the Negus. The fact that the Muslim calendar is dated from the migration of the Prophet (peace and blessings of Allah upon him) from Makkah to Madinah indicates the lofty place migration has in the life of the Muslim community and in the consciousness of its members.

Additionally, history records the massive migrations of those Muslims who fled from oppressive, tyrannical, violent rulers or invaders. One of the most famous examples we can relate in this regard is the massive westward migration of those escaping the advancing Mongol hordes. Among those refugees was the great poet, Rumi, who along with thousands of others fled his home in Balkh, located in present-day Afghanistan, eventually settling in Konya, in the heart of Anatolia. Others migrated for economic reasons. The historian, Richard Bulliet, theorizes that the economic collapse of Khurasan, a once-thriving Sunni intellectual hub in eastern Iran, led to the migration of large swaths of its population to Syrian and Egypt. In his view, the many scholars among those refugees led to an intellectual revival in the lands they settled in.

As for asylum, it can be granted by both the state and an individual Muslim to individuals or groups. The foundations of this principle in prophetic practice was established during events which occurred during the conquest of Makkah. The Prophet ṣallallāhu ‘alayhi wa sallam (peace and blessings of Allāh be upon him), as the de facto head of state, issued an oath of protection to the people of Mecca when he declared, “Whosever enters the house of Abu Sufyan is safe. Whosoever casts down his weapons is safe. Whosoever closes his door [and remains inside] is safe.” (Sahih Muslim, 1780) Ibn Ishaq’s version adds, “Whosoever enters the [Sacred] Mosque is safe.” (Narrated in Sirah Ibn Hisham, 4:35)

A related event is Imam Ali’s sister, Umm Hani, granting asylum to al-Harith bin Hisham and Zuhayr bin Ummayya that same day. When faced with the prospect of their execution by her brother, Imam Ali, she locked them in her house and went to the Prophet (peace and blessings of Allah upon him) to inform him that she had granted them asylum. The Prophet (peace and blessings of Allah upon him) responded, “We grant asylum to those Umm Hani has granted asylum to and we protect those Umm Hani has extended protection to.” (Sirah ibn Hisham, 4:42) In other words, the entire Muslim community, globally, is bound to respect the oath of protection or asylum granted by even an individual Muslim.

This idea of the entire Muslim community respecting a grant of asylum extended by even a single Muslim is strengthened by the Hadith:

The protection of the Muslims is one and the least of them can grant it. Whosoever violates the asylum extended by a Muslim upon him falls the curse of Allah, His angels and all of humanity. Never will an obligatory or voluntary act be accepted from him. (Bukhari, 3172)

Allah subḥānahu wa ta’āla (glorified and exalted be He) praised the Ansar of Madinah for how they loved those that migrated to them and preferred them even over themselves. (Quran: 59:9) They bore no resentment to those that migrated to them and sought reward only from Allah for sustaining them. They knew that supporting those in need was only a means of goodness in their lives rather than a burden. These powerful Islamic teachings have been codified by our scholars into a sophisticated system of amnesty, asylum, and respect for the status of refugees.

Hence, when we view the sickening conditions those migrating to our southern borders are exposed to, we should be touched and moved to action knowing that our religion grants those fleeing persecution, oppression, or ecological devastation, the right to migrate and to be duly considered for asylum. Our actions, however, must be based on principle and knowledge. We should further vigorously defend the dignity our Lord has afforded to all human beings, and our obligation to assist those who are suffering from recognized forms of oppression.

Our view on this issue should also be informed by the knowledge of our own country’s history as a nation of immigrants in the Native’s land. It should further be shaped by understanding the way nativist and white supremacist tendencies have fueled xenophobic and exclusivist policies and how in many instances our sometimes misguided policies have created many of our most vexing human rights challenges. It must also be informed by our obligation as American citizens.

For example, we need to understand that the overwhelming majority of families, children and individual adults arriving at our southern border from the “Northern Triangle” of El Salvador, Guatemala and Honduras are fleeing intolerable levels of violence. That violence is not just that of ruthless street gangs, such as MS-13, it also emanates from government-sponsored death squads, many of which were organized and trained by the CIA or the US military at the former School of the Americas based at Fort Benning, Georgia. The infamous Battalion 316 of Honduras was an American-trained death squad responsible for hundreds of extrajudicial killings in that country during the 1980s and into the 1990s as well as the kidnapping and torture of thousands of Honduran citizens during the same period. These death squads are beginning to reappear in the wake of a wave of right-wing regimes assuming power throughout Latin America.

The combination of American political and economic pressure through the mechanisms of neocolonialism used to control and systematically under-develop former and present “banana republics,” the International Monetary Fund (IMF), plutocratic regimes increasingly beholden to Washington DC, integrating the violence of both death squads and drug cartels into their crushing of both popular dissent as well as any attempts at economic diversification and stratification help to create the conditions producing the waves of migrants moving towards our southern border. Long before they sought to cross our borders, our borders crossed them.

Long before they sought to cross our borders, our borders crossed them.

Despite the history, the way that the Trump administration has chosen to deal with the current crisis, largely for cheap race-baited political gain, has challenged the God-given rights to migration and asylum, exacerbated the humanitarian crisis at the border, and diminished the standing of the United States internationally. It is critical to understand, however, that just as the policies producing the floods of migrants from parts of Latin America are not uniquely a product of the Trump administration, Trump is not the first racist to occupy the White House. We could mention Richard Nixon, who famously embraced Kevin Philip’s “southern strategy,” to wrest the south from the control of the Democrats; we could mention the KKK-loving, segregationist, Woodrow Wilson; we could mention the slave-driving, genocidal ethnic cleanser Andrew Jackson, as well as others.

What makes Trump unique, as Greg Grandin emphasizes in his latest book, The End of the Myth, is that Trump is a racist who has appeared at a time America is no longer, via conquest or economic domination, expanding her frontiers. With the ensuing erasure of the myth of American exceptionalism, the “American people” can no longer point to our global economic or political domination as the difference between “them” and “us.”

Unable to deflect our nagging national problems, one of the most vexing being the race issue, by looking outward, large numbers of white Americans are turning inward with xenophobic frenzy. That inward turn creates a focus on outsiders who threaten “our” rapidly disappearing “purity.” Hence, the border, symbolized by the wall, becomes not just an indicator of national sovereignty, it becomes a symbol of white identity. A symbol Trump invokes with seldom matched mastery. Vested with the passion emanating from the defense of an embattled race, innocent brown children taken from their mothers and imprisoned in overcrowded, feces-stained gulags become easily dismissed collateral damage.

Generally speaking, the same playbook that has been employed against the Muslim and other immigrant communities, specifically refugees from the Middle East, has been employed against the immigrant community as a whole. In far too many instances, America’s destructive foreign policy leaves helpless populations running to our shores, increasingly to be dehumanized and disregarded again in order to pander to the worst of our domestic propensities.

So we call upon the Muslim community to not only assist in efforts to support our migrant brothers and sisters but lead the way. Get involved in advocacy work, support immigrant justice organizations, join the sanctuary efforts and lend yourself and your wealth in whatever way you can to be at their aid. By the Grace of Allah, we have launched a campaign to reunite as many families as we can. The Prophet (peace and blessings of Allah upon him) said, “Whoever separates a mother from her child, Allah will separate him from his loved ones on the Day of Resurrection.” (Tirmidhi, 1566) We hope that in reuniting families, Allah will reunite us with our beloved ones on the Day of Resurrection, and specifically with the beloved Prophet (peace and blessings of Allah upon him) in the highest gardens of Paradise.