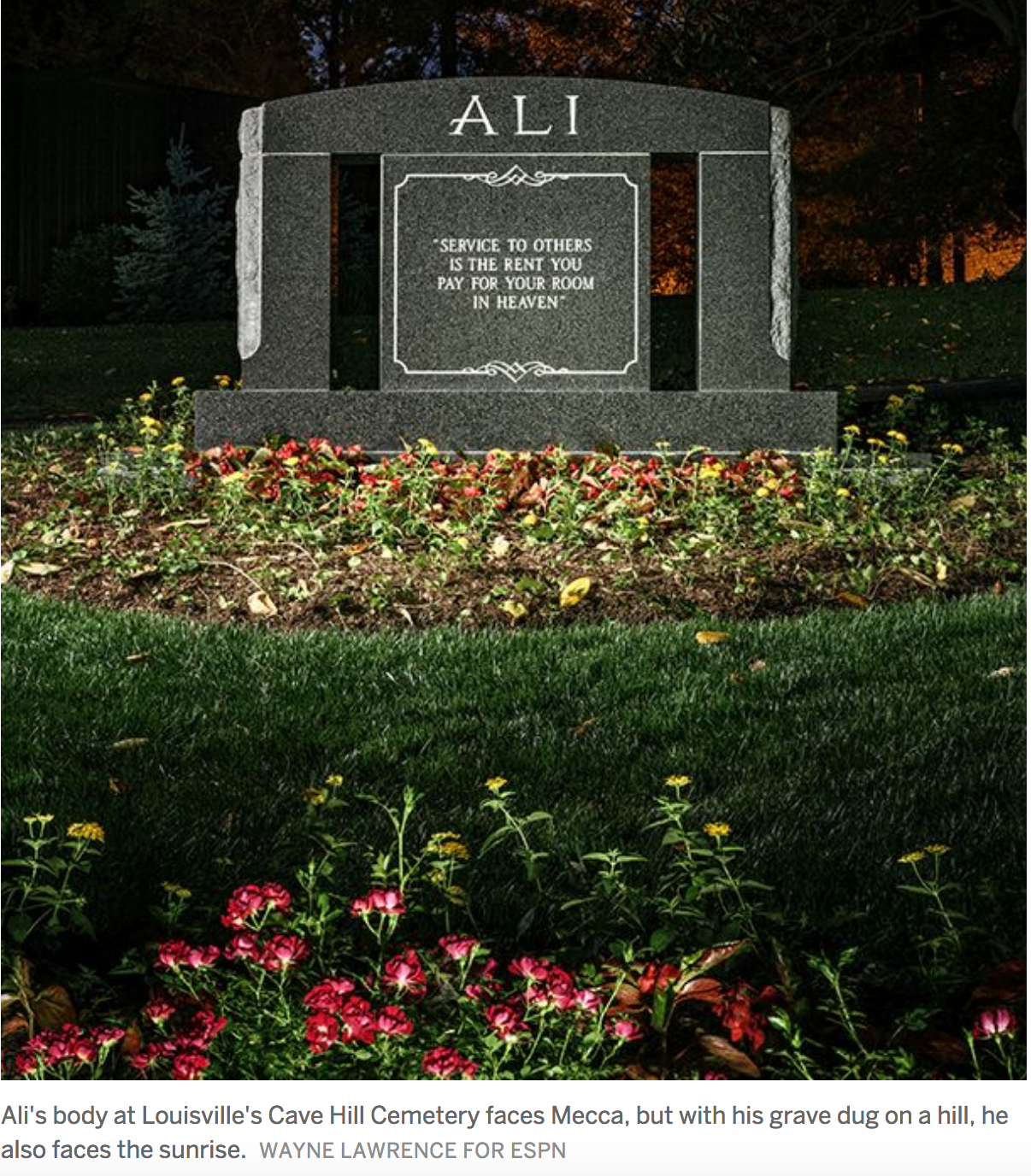 The Greatest, At Rest

One year ago, a chosen few brought Muhammad Ali home for the last time. This is the story of how they carried out their sacred calling.

The sound Muhammad Ali hears as he dies is the sound that babies hear right after they’re born. It is just after 8:30 p.m. MT on June 3, 2016, a Friday. He is in Room 263, in the intensive care unit of the HonorHealth Scottsdale Osborn Medical Center, near his home in Paradise Valley, Arizona. He has been disconnected from the ventilator that has been keeping him strenuously alive, and the imam at his bedside has begun the call to prayer, as if ushering a newborn into the world.

The imam, whose name is Zaid Shakir, does not know why he has sung the familiar keening song; it is traditional to sing to those who are close to their first breath but not to those close to their last. But he has flown into Arizona from California, and he reached Ali’s room not long before what he calls “the paraphernalia of life support” was removed. Lonnie Ali is there. Ali’s nine children are there, along with many of his grandchildren, and after reciting supplications and reading from the Quran with them, Shakir suddenly finds himself in the grip of spontaneous necessity. He has been watching the pulse in Ali’s neck, watching it surge with life after he started breathing on his own and then watching it slowly ebb, and now he leans over and with his mouth close to Ali’s right ear, he sings, “There is no God but Allah, and Muhammad is his messenger.”

Shakir is tall and thin, nearly spindly, with a crooked smile and a beautiful voice, a voice that even when he’s speaking carries a hint of a jazz, a way of hanging behind the beat before finding all the right notes. He does not whisper to Ali. He does not sing softly. He sings out loud, so that everyone can hear, so that the words will fill Ali’s consciousness. Then he places in Ali’s right hand a string of prayer beads offered by one of his grandsons and closes Ali’s fingers around it. He begins talking to Ali, entreating him, exhorting him, telling him, “Muhammad Ali, this is what it means, God is one; say it, repeat it, you’ve inspired so many, paradise is waiting—“

When Shakir begins the call, Ali is alive. When he finishes, a doctor comes in and presses his stethoscope against Ali’s chest; Shakir gently closes Ali’s eyes. He lived for approximately 35 minutes after the disconnection of the ventilator, but now, at 9:10, Muhammad Ali, 74 years old, the three-time heavyweight champion of the world from Louisville, Kentucky, is pronounced dead, of septic shock.

Lonnie asks Imam Shakir to stay with her husband while the family files out of Room 263 and enters a new and diminished world—the world without Muhammad Ali in it. He does for a while, but the room begins to give way to professionals. There are nurses and hospital staff. There are two funeral directors who were literally hidden in another room when Ali was dying and now emerge from the shadows. And there are three men who wear hastily packed suits and faces of seen-it-all vigilance but who have never seen what they’re seeing now. Their names are Todd Kessinger, Brian Roggenkamp and Jon Lesher. They’re off-duty homicide detectives from the Louisville Metro Police Department, and they flew to Phoenix the day before on a private jet to provide security for the Ali family. They’re no strangers to death, horrible and unnatural. They’ve been around bodies in every possible condition. But the body in the bed is the body of Muhammad Ali. He is covered, at first; then, after the nurses have removed the tubes and disconnected the monitors that sustained him, uncovered. It is their job to secure the room against intrusion, and Ali against exploitation—they’ve heard rumors that a tabloid television show is offering a $200,000 bounty for the first photos of The Greatest on his deathbed. But now they wonder how easily a photograph of the gaunt and balding man on the bed could be recognized. They feel tremendously solicitous toward him yet also somehow ennobled, as if they have come into the presence of a force larger and stronger than themselves. It is not fame, exactly; it is history, and Lesher keeps thinking that no matter what happens to him in the course of his life, no one will ever be able to take this moment away from him. So many people had encounters with Ali when he was alive: chance meetings that became, by the force of Ali’s personality, indelibly personal, the stuff of stories told and retold. Lesher never did; neither did Kessinger or Roggenkamp. They encounter Ali dead, yet even with his life fled, his power persists, as if it’s part of the atmosphere around his body. They are in the room with Muhammad Ali for 45 minutes. They have responsibility for Muhammad Ali for 45 minutes, until Roggenkamp departs to drive Lonnie Ali home. But there is a problem as they go to leave; Ali was not admitted as Muhammad Ali. He was admitted under an alias, confusing one of the funeral home directors. Finally, Kessinger says, “Look, it’s Muhammad Ali. Let’s just go.”

For full version of this story, it appears in ESPN The Magazine’s June 12, 2017 World Fame Issue