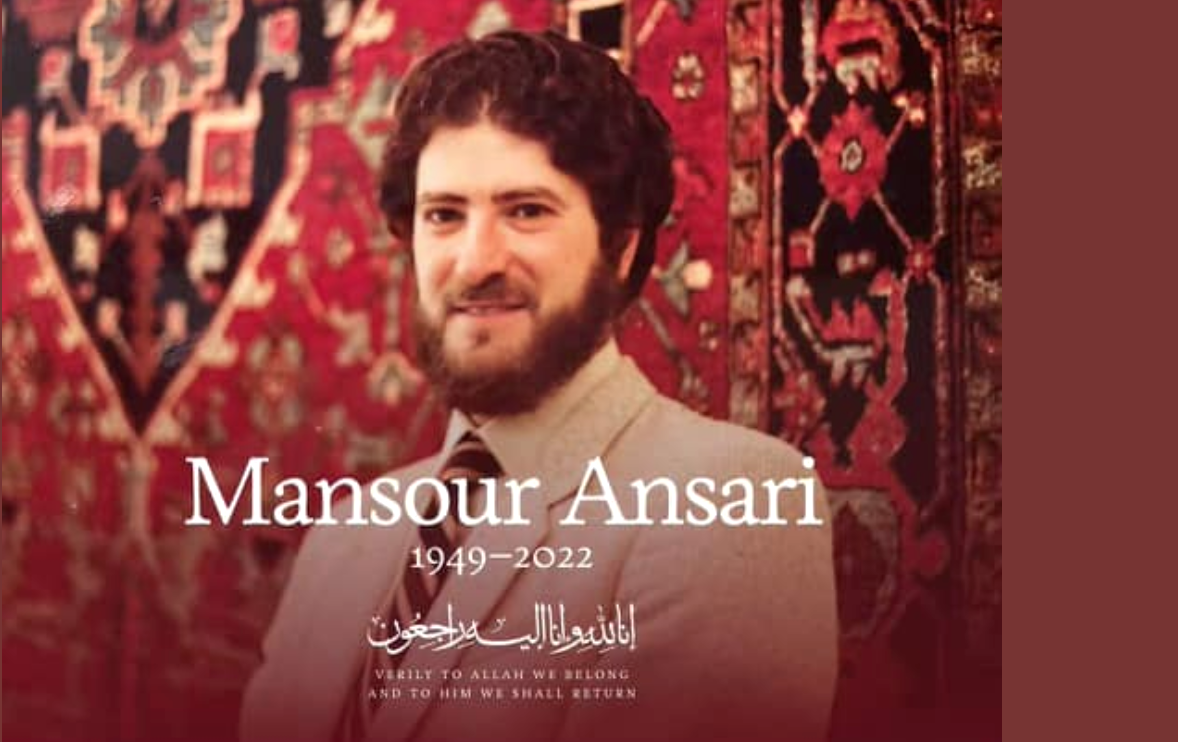 Farewell to Brother Mansour Ansari: No More “Humazatin’ and Lumazatin’

I first met Brother Mansour Ansari in Washington DC in 1981. It was probably at one of the many rallies occurring around that time in support of the Iranian Revolution, or one of the many causes the Revolution focused our attention on, such as the Palestinian situation. One thing led to another and before I knew it, I found myself a member of the same Muslim group as Brother Mansour, an organization known as Jamaat al-Muslimeen. I was in Washington DC, where I was studying International Relations at American University, and Brother Mansour’s family was in Atlanta, where he ran an oriental rug shop along with an Islamic bookstore on Atlanta’s famed Peachtree Street.

I would frequently meet Brother Mansour and his wife, Sister Kafi, either in Washington at the many rallies, lectures, or community-building events occurring in the city at the time, or at his Atlanta home, which was the de facto Southern headquarters of the “Jamaat.” One of the fixtures at the rallies was Brother Mansour’s two daughters, Zaynab and Sumayya. I can remember frequently carrying them on my shoulders as we raucously marched through the streets of the city yelling things that would likely get us arrested, or tarred and feathered online, were we to chant them today.

Brother Mansour was not a “fire-breathing” revolutionary. He was certainly a revolutionary. He was able to identify a lot of wrongs in the world, and he was courageous enough to risk his business, reputation and even his life attempting to right those wrongs. However, in true prophetic fashion, he did not allow the wrongs of the world to enrage him or make him bitter. He did not allow those things to take the smile from his face, to harden his heart, or to rob his soul of his legendary sense of humor.

Brother Mansour was also a traveler. His commitment to his family, his revolutionary idealism, and his business interests carried him from the swankiness of Peachtree Street to soulful storefront masjids in the ghettos of America; from the bustling streets of Tehran and Mashhad, Iran to the madrasas and bazaars of Damascus and beyond. Whether in the halls of power or in the homes of the powerless, Brother Mansour has left behind a trail of friends and well-wishers, as well as a plethora of laughs and countless smiles.

In remembering Brother Mansour, I am reminded how fleeting this worldly life can be. Less than one year ago I was in Atlanta for a youth football tournament. I was blessed to spend the better part of an entire day with Brother Mansour. He picked me up and took me to Jumu’ah. After Jumu’ah we went to one of his favorite Somali restaurants. While waiting for the food and during the meal we were able to catch up on things, as they say. Now I am back in Atlanta and Brother Mansour has moved on. While it is certainly a sad time, a smile teases my lips as I think of how Brother Mansour, in his words, won’t have to deal with anymore “humazatin’ and lumazatin.” Farewell dear brother, until we meet again.