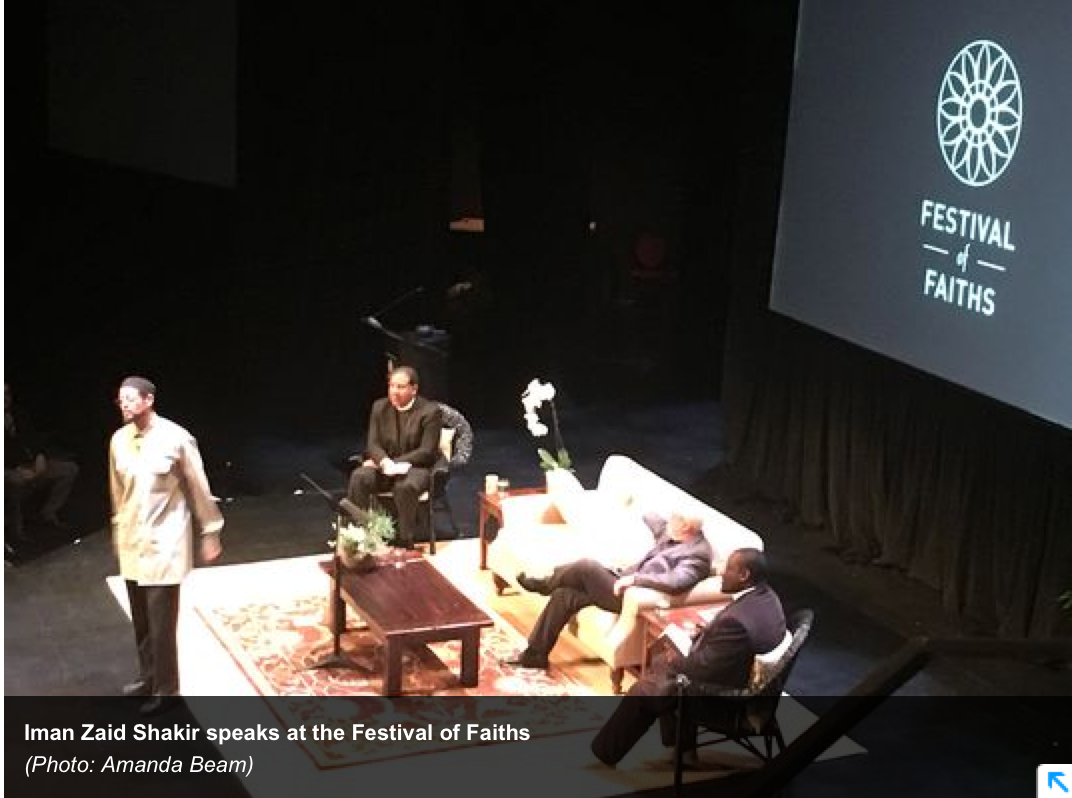 Responses to terms can be telling. Just a mention of the Black Lives Matter movement can elicit some of the most visceral reactions from people of all races. No matter how little they know the history or purpose of the activist effort, certain folks feel emotion well up in their stomach upon just hearing the short phrase “black lives matter.”

For some, it’s liberation. For others, disgust.

As the Deputy Director of Faith and Formation for the PICO National Network, the Rev. Alvin Herring understands the power in these words. And so before he began to moderate a Friday panel on Black Lives Matter at the Festival of Faiths, he requested audience members to speak that phrase to their neighbor, not once but twice.

“And why is that important?” Herring asked. “Because if we can in this moment publicly state in the city of Louisville and the Commonwealth of Kentucky that black lives matter, then all those black bodies whose bones rest in that river just down this block can rejoice.”

An American history of black injustice, violence, enslavement and suppression continue to fuel the fire of present anger. Fellow speakers Imam Zaid Shakir, the Rev. Michael McBride and author Jim Wallis spoke of this narrative and how it shapes the movement in this day and age.

Wallis, a Christian theologian, traces the lineage of the BLM movement back to the early formation of America where the government principle was that indigenous and black lives didn’t. Today’s social activism remains a response, he said, to what he calls American’s original sin of racism.

“250 years of slavery, 100 years of legal segregation and discrimination and terrorist violence against black lives and bodies, 50 years of a civil rights movement, seven years of a president, and we’re not cleansed,” Wallis said.

READ MORE: Additional coverage of the Festival of Faiths http://www.courier-journal.com/topic/festival-of-faiths/

White America’s salvation may be coming, he said, with the changing demographics of the U.S. population. In the next two decades, America will undergo a fundamental shift, one in which the white race will no longer be the majority.

Powers that be understand the coming tide, he said, and have enacted strategies such as racial gerrymandering, mass incarceration and voter disenfranchisement. He believes that while these in the ruling class can’t stem the racial shift, they “can block, obstruct, delay and prevent that demographic from changing America.”

“If we care about black lives matter, or justice, or our theology, we as a people of faith need to come up with a strategy to point by point counter their strategy,” Wallis said.

Also offering solutions to what he believes as systematic repression of the black population, McBride discussed a three-pronged approach the Live Free Campaign in which he is involved utilizes. Proclamations, policies and programs, the lead pastor of The Way Christian Center in California said, will build the foundation for change.

Combatting implicit bias as well as unlearning falsities that lead others to believe black lives are inferior can aid in this quest.

Statistics accompanied his presentation. Only 28 hours pass between the death of a black person in this country at the hands of law enforcement, security or vigilantes in this country, McBride said.

As for intra-communal gun violence, or what others may refer to as “black-on-black” crime, 0.5 percent of individuals in any given city are responsible for 60 percent of that type of criminality, he added.

“You have a very small number of individuals who are solving their conflicts with violence,” McBride said. “Why is it that a small, small number of actors can over determine in our minds the criminality of a whole group? It is because black lives do not matter.”

Imam Shakir, one of the West’s leading Islamic scholars, has buried young victims of violence. Justice is one of the great human virtues, he said, but it’s not always immediate. Look at the struggle of slavery in the founding moment of the United States to the Constitution relegating black men to 3/5ths the value of a white voter, from the courage of Rosa Parks to the sacrifices of Dr. Martin Luther King, Jr.

Yet, with all those throughout history standing vigilant, justice still has not come to America today, he said.

“While we’re fighting for justice, we have to understand that we don’t need anyone external from ourselves to tell us that our lives matter. Our lives matter because we’ve been given a basic fundamental human dignity, human worth and value from God,” Shakir said.

The system can take away equal education and decent housing from the black community, he said, as well as target them disproportionately by police, but no one can take away humanity.

“Dignity cannot be taken. It can only be forfeited,” Shakir said.

During his earlier comments, Herring seemingly agreed, using Louisville as an example.

“There was a time in the city where black lives didn’t matter, one could suggest that time continues until today,” Herring said. “But let me tell you, that is not our destiny.”


This is the right blog for anyone who needs to learn about this issue. You recognize so much its almost difficult to argue with you (not that I actually would want… HaHa). You definitely set a new spin on a subject thats been written about for years. Excellent stuff, just amazing!


This web site is actually a walkthrough for all the info you needed about this and did’t understand who to ask. Glimpse here, and you’ll definitely find it.


Your posting really stneighterad me out. Thanks!


&lt;a href="http://fsmudbtavq.com"&gt;Th'tas&lt;/a&gt; going to make things a lot easier from here on out.


It's really very difficult in this active life to listen news on TV, therefore I just use the web for that purpose, and obtain the latest news. bayern munchen norge