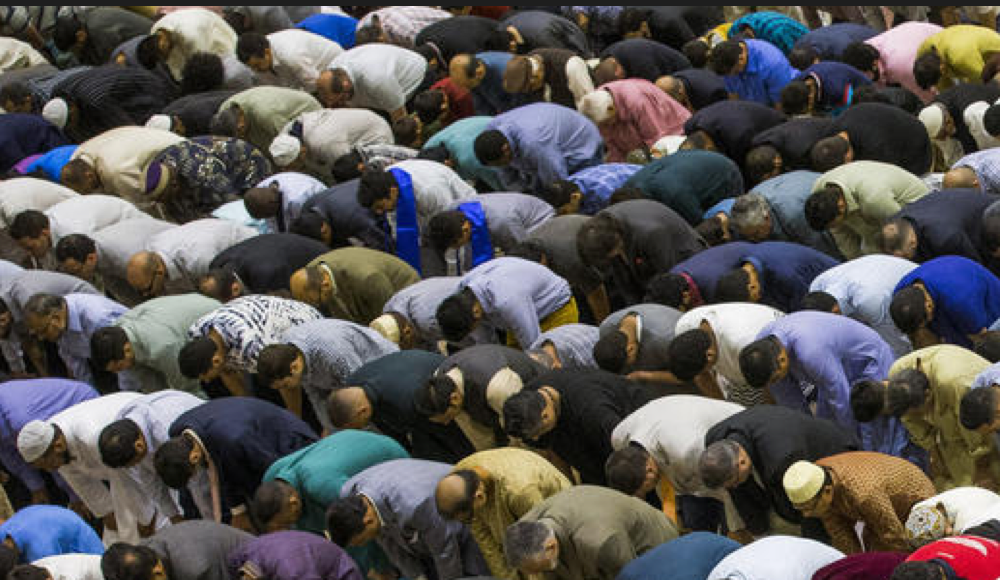 Bright colors and breezy fabrics of traditional tunics and trousers floated across the sidewalks of Navy Pier, which housed the first Eid Expo, bringing together diverse denominations and ethnicities Wednesday.

Asma Ahad, director of market development for the Islamic Food and Nutrition Council of America, one of the co-sponsors along with the Council of Islamic Organizations of Greater Chicago, said 20 years ago, a community Eid was held at McCormick Place, but since then, people moved to the suburbs and attended Eid celebrations at their local mosques.

“Our vision was to bring the community together and also demonstrate our holiday to the broader community,” Ahad said.

While women gathered in the back half of the room and men gathered at the front, a singsong call to prayer in Arabic resonated in Festival Hall A. The concrete floor was padded with cardboard lined with black tape, and many people sat on the floor.

Shortly after 10 a.m., Shakir took the stage and led thousands of people in prayer. They raised their hands to their ears, followed by a bow at the waist before getting down on their knees and pressing their foreheads to the ground. The room was quiet save for Shakir’s voice.

Shakir spoke about what it means to be Muslim and how people like Ali, a former heavyweight boxing champion, are who people should think of instead of extremists.

As Shakir called for peace, mercy and charity, a little boy walked around with a red bag of Lindt chocolates and handed them to random people before smiling and walking away.

Shakir emphasized that those who had committed acts of terrorism and violence were not following the Quran’s teachings and were not strong in the true Islamic faith, improperly listening to teachings on the internet rather than imams who have received traditional training.

Farah Adil, 46, of Chicago, said while Shakir’s discussion of racism and extremism was important, it scared her children, and she said she wished his speech focused more on the positive aspects of the religion.

“I think it could have been less political,” Adil said. “There is such a lot of beauty in Islam. There is a such a lot of peace in Islam. ... Just to hear all of that with the blowing up and the racism, I don’t know if I would have liked my children to hear all of that. I think as an adult, it’s OK for me to process, but it was very intense, like (my son) doesn’t want to be here now.”

Mohammed Barnawi, who lives in Hyde Park but is originally from Saudi Arabia, said the event was a good opportunity to gather with friends and family who traveled to celebrate Eid together and also to see other denominations.

“In my country, we have the same, here’s it’s multicultural,” Barnawi said.

Halal food vendors that meet the strictest standards of animal slaughter and preparation, like Bombay Wraps and the Halal Guys, were at the expo. Parents and children lined up for cotton candy, henna and bounce houses.
By Grace Wong - Contact Reporter
Chicago Tribune

Adil, who was eating lunch with her family, said the experience was important for her children as it helps them understand their religion and shows that Muslims are “normal.”

“We love that when you come to a large community like this, you see the colors of Islam, people from every part of the world,” Adil said. “And for my children it was very important because there is so much negative portrayal in the media that something like this lets people know that the majority of the Muslims are peace loving. It’s very moving to be part of something like this.”

.(JavaScript must be enabled to view this email address)


A piece of eriuotdin unlike any other!