Looking Back to Look Ahead 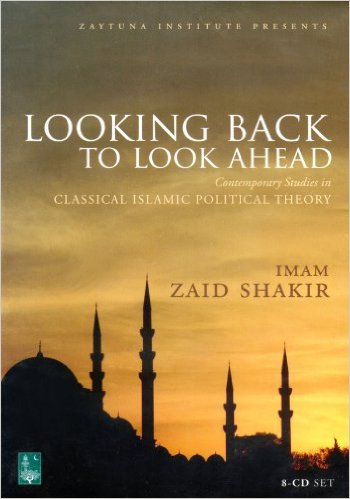 In this series of four special lectures, Imam Zaid Shakir examines some of the most pertinent issues of our day in the light of classical Islamic political theory. Opening with an insightful overview of classical Islamic political theory, each of these four dynamic and provocative talks push the limits of the Muslim political imagination to new heights, and force one to think about what it means to be a Muslim in today’s challenging times. Delivered by one of the leading Islamic thinkers in North America, this set is indispensable for anyone seeking to work towards building a healthy future for Islam in Western societies.

LECTURE ONE: Does Islam Present a Program for World Domination? An examination of the key arguments of those who pose that Islam is a religion that is predicated on the idea of global political domination and thus must be checked by the full military might of the West. This lecture highlights the spurious nature of such an argument on theological, historical, and political grounds.

LECTURE TWO: An Islamic View on Suicide Bombings An exploration of classical Islamic texts and principles to argue against suicide attacks, specifically those that indiscriminately target innocent civilians. This lecture assesses the efficacy of such attacks based on a strategic and cost-benefit analysis of the ongoing crisis in Palestine.

LECTURE THREE: Rights and Responsibilities of Muslim Minorities A presentation of a practical political guide for Muslims in the West, addressing issues such as the status of Muslims as a protected minority, the sanctity of the public space, and much more. This lecture outlines a program which, if followed by Muslims in the West, and properly understood by non-Muslims, would go a long way to alleviate much of the tension between these elements of Western society.

LECTURE FOUR: The Islamic Basis for World Peace A look at the Qur’anic basis for an authentic Islamic program to address many of the most pertinent issues that divide and alienate members of our human family. Examining critical concepts ranging from the common bonds of humanity to an argument for transcending the nation-state system, this closing lecture lays out an inspiring agenda based on the moral vision Islam offers to humanity at this critical and tense moment in history.