Treatise For The Seekers Of Guidance 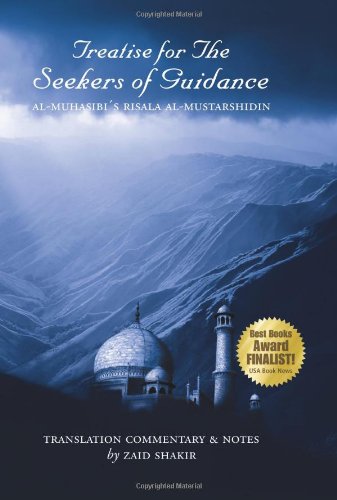 The translation, notes, and commentary of Imam al-Harith al-Muhasibi’s Risala al-Mustarshidin (Treatise For The Seekers Of Guidance) by Zaid Shakir is intended to serve as a layman’s guide to Islamic spirituality. Al - Muhasibi presents most of the major ideas that would both serve as the basis for a full program of spiritual development and comprise an insightful overview of a system of Islamic moral psychology. He examines in great depth and penetrating insight the psychological motivations and justifications for moral thought and action and correspondingly the associated bases of immorality. In so doing, he has provided a road map that any person can follow to overcome the guiles of his fundamental enemies: the world, the ego, the whims of the soul, and Satan.

Treatise For the Seekers of Guidance can also be bought from Amazon.

Reviews:
“Treatise for The Seekers of Guidance is a classic of early Islamic literature.  It provides us with a document that testifies to the fundamental principles, attitudes, and incumbent conduct of Islamic moral psychology from the formative period.  This work, from the pen of Imam Harith al-Muhasibi (d. 243/857), the mentor of Junayd, is one of earliest examples we have of the role these principles played in constituting the moral thought and action that constitutes the fabric of Muslim society.  This translation in Imam Zaid’s own words is, “a layman’s guide to Islamic spirituality” and as such is a key text to our understanding today of the multiple faceted framework behind the principle themes of the teacher/disciple relationship and testifies to the manner in which these principles have became integrated within the process of Islamic spiritual orientation.  Among the salient characteristics of Treatise for The Seekers of Guidance is the care Imam al-Muhasibi has taken to structure the discourse of the treatise on the foundations of the Qur’an and the Sunnah of the Prophet, peace be upon him, in such a manner that he provides us with a clear and coherent criteria for both the theoretical and practical aspects that comprise the Islamic view of human development in general and salvation in particular.

Imam Zaid Shakir has accompanied this text with an in-depth commentary based upon the Qur’an and Hadith that enriches and contextualizes the concise prose of Imam al-Muhasibi within the social milieu of our times.  His employs language that is accessible and free of technical terminology.  His translation thus provides sound guidance to anyone who is seeking in the midst of the uncertainties of social turmoil and personal struggle, a whole and integral path, a unity of form and substance, self-effacing comportment, and intimate knowledge of God.  In short this is a work that no ones library should be without.”
-Dr. Kenneth Honerkamp, Associate Professor of Islamic Studies The University of Georgia in Athens

“There is no way to know how much of traditional Islamic scholarship has been lost forever in libraries that have been burned, looted or destroyed. Other manuscripts lay forgotten in dusty archives, unread and untranslated. New literary works such as “A Treatise for the Seekers of Guidance” seek to preserve a part of Islamic heritage and are astoundingly relevant to our homes and society today.”
- Dr. Noreen Kassem.

“Powerful and magnetic ... it is difficult to put this book down. An essential primer for self-rectification and drawing closer to the divine, this is a highly accessible translation of a classical Islamic text that provides ample guidance and advice for souls longing for spiritual nourishment and refinement amid the prevailing state of social and moral disintegration. This book not only offers definitive counsels on rectifying the self and becoming responsible and dignified human beings, but it also showcases the moral and ethical standards which Islam calls to. Imam Zaid Shakir has done a tremendous service in rendering this crucial text into the English language.”
-Aftab Ahmad Malik, Visiting Fellow - DEPARTMENT OF CULTURE & ETHNICITY, UNIVERSITY OF BIRMINGHAM.

“Translation and exegesis of a classic treatise of Islamic mysticism. Baghdad wasn’t always a bombed-out, bullet-scarred city. In the ninth century, it was the center of the Islamic world and an academic mecca, embracing scholars translating classic Greek, Roman, Syrian Christian and Indian texts into Arabic. In this milieu, Imam al-Muhasibi wrote Treatise for the Seekers of Guidance, which, in a nutshell, is a explanation of Islamic spiritual development that emphasizes the importance of Muslims cleansing their hearts from worldly attractions and maintaining Taqwa, or a Godconsciousness
that manifests itself in purposeful action. Shakir, translator and tour guide, walks the reader through the document, sometimes line by line, providing context and clarification through constant
references to the Qur’an and Hadith (or prophetic tradition). Occasional illuminating tangents on Islam in the contemporary world, especially post-9/11, break up some of the monotony and redundancy of the treatise, making the translation more readable and relevant to non-Muslims. Through it, the reader can see Islam as a double-edge scimitar.Slicing through the garish material excess and social and moral decay that characterizes a lot of the modern capitalist world, the treatise explains that Muslims were created to worship God and serve others. It’s a simple, beautiful message that makes it easy to understand why Islam is the world’s most popular religion. However, the flip side of the proverbial sword reflects a conundrum. To be saved and make it to paradise in the afterworld, one must maintain a real and present fear of God and endure trials and tribulations while on earth. Shakir is to be lauded for his commentary, bold at times. He criticizes some contemporary Muslims for hypocrisy, as well as slandering, vilifying and despising their brethren, and cites an inability of Muslims to give sincere advice to other Muslims as a cause of ongoing troubles. But he also casts judgment on Western society’s tendency to commoditize everything, making it difficult for Muslims to recast their gaze from earthly delights upward to more divine endeavors. A simple, easy-to-read guide to Islamic spirituality that helps to explain Islam’s ongoing conflict with the Western world.”